THE BRAND ON THE BIG STAGE 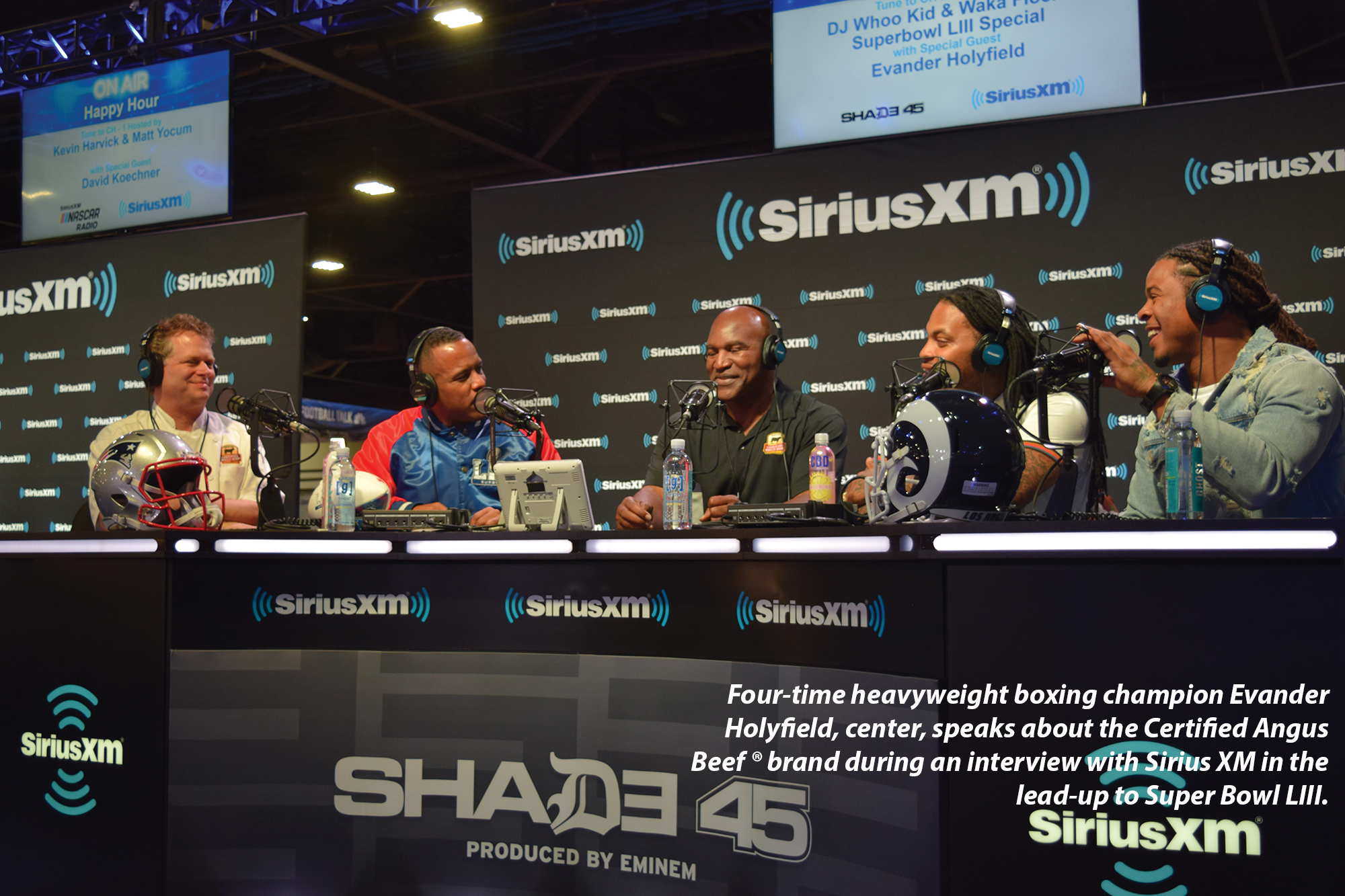 “The truth is this: Certified Angus Beef ® is the best beef in the world.”

High praise, indeed—but those who know the brand and believe in it wouldn’t quibble with that statement.

When the praise comes from a beloved Pro Football Hall of Famer and is shared with national media outlets on the lead-up to Super Bowl LIII, though, it arguably takes on some greater significance.

“It’s the highest level. It’s the Pro Football Hall of Fame, as far as steaks. Yeah, that’s what you’ve got,” legendary kicker Morten Andersen told the media. “The Certified Angus Beef ® brand is obviously the standard-bearer for beef in America.”

Andersen, along with four-time heavyweight boxing champion Evander Holyfield, were in Atlanta in partnership with the brand for the big game. Beforehand, the dynamic duo visited The Culinary Center to learn about the brand beyond its reputation before heading to Super Bowl LIII’s Media Row, where media gather during the days leading up to, during and after the big game. Andersen and Holyfield were joined by team members including chefs Michael Ollier and Tony Biggs. 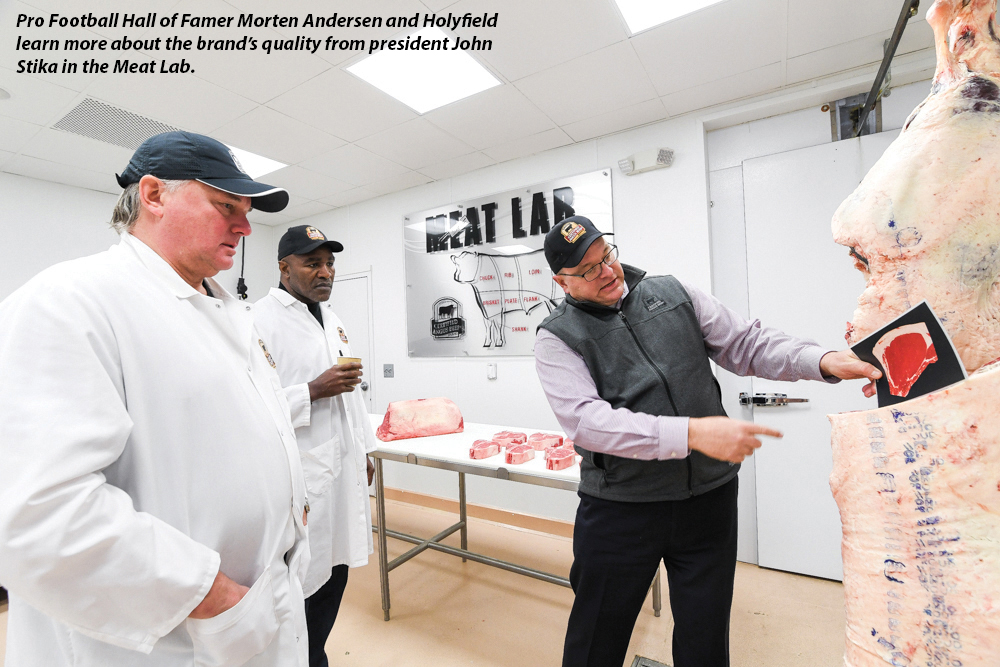 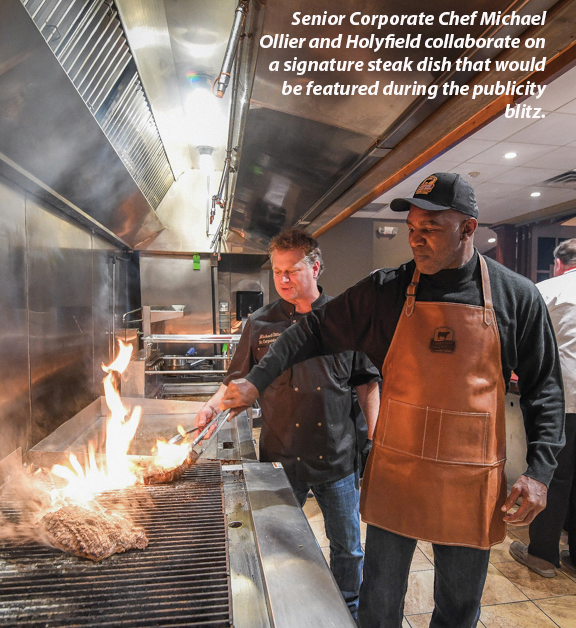 The chefs had worked with the special ambassadors during their time at brand headquarters to develop their own signature recipes. Ollier and Holyfield developed “Evander’s Grilled Strip Steaks with Real Deal Steak Sauce” while Biggs and Andersen whipped up “Morten’s Tenderloin Châteaubriand with Béarnaise Sauce”—big, bold dishes that matched the big game vibes.

Those recipes were then prepared for Media Row participants like the CBS Sports network, Fox Sports Radio, Sirius XM radio, and the United Kingdom’s No. 1 sports radio show, TalkSPORT, to keep them fed and happy during interviews with the greats. The same recipes were also shared on the Big Game, Big Steaks webpage, so people watching the game at home could enjoy the beef, too.

As part of the overall publicity blitz, which garnered an estimated 175 million impressions, the brand’s “Rare Moments, Done Well” commercial aired in key markets with strong partner presence before and during the big game, placing the brand on a level playing field with other prominent national brands. The goal of it all: to position the very best Angus beef as a household name and reinforce its reputation around the world.

“Activities like these connect the ultimate customer at a higher level with the brand,” says Tracey Erickson, the Certified Angus Beef ® brand’s executive vice president of marketing. “Every voice counts in helping share our brand and its story, and in the end drive consumers to brand partners.”

For the Love of Chuck

Another high-profile brand-building opportunity came via Food Network Canada. Chef Dylan Benoit, a loyal brand ambassador for years, was going to be hosting a new show called “Fire Masters,” featuring some of North America’s best chefs in a series of head-to-head grilling competitions.

It was the chance to work with a popular television network that the brand had been waiting for. One that would allow the brand logo to be present, the full name to be said and the product to be used by the contestants.

“In such a format, we don’t want to be just a logo. We want our product to be talked about, and Food Network Canada did that for us,” Erickson says.

The brand was included in every segment of the first season of “Fire Masters,” which had nearly 130,000 viewers. In addition, two other friends of the brand, Ray “Dr. BBQ” Lampe and Amy Mills, appeared as judges on the show, testament to the ever-growing network of chefs, pitmasters and meatheads who are part of the brand community.

All of that would have been enough. But then, something even better happened: U.S. Cooking Channel, a sister network to Food Network Canada, picked up the show and aired it in its entirety. That meant more brand and logo presence in the homes of thousands, and the hundreds of local brand partners where those viewers shop.

Production is under way for new seasons of the show that also feature the brand. 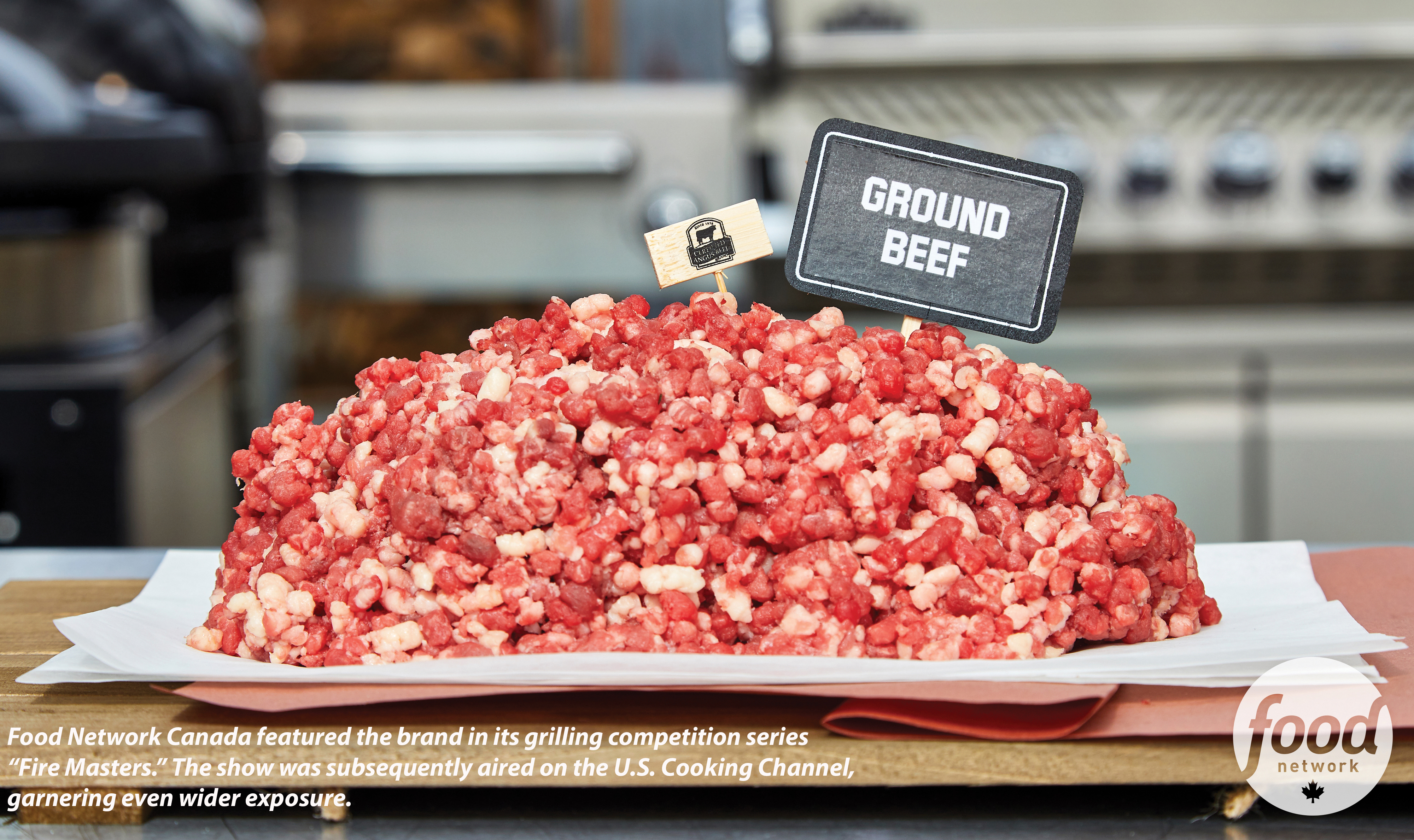 A Four-Country Tour, and Beyond

As the saying goes, “go big or go home,” and that’s especially true in certain markets—in particular, when it comes to customer events. These gatherings aren’t just a typical dinner or short meeting. They are big, bold and extravagant, with many attracting the attention of royalty and dignitaries.

That was the opportunity, and the challenge, when planning the Middle East #BestAngusBeef Ever Tour, which included stops in Kuwait, Qatar, the United Arab Emirates and Jordan. Not only did the beef-filled events in each country foster relationships with partners in the Middle East, but also garnered media coverage and customer connections.

Biggs, who spent time cooking for the king and queen of Jordan before joining the brand, was featured as the host and lead chef. The U.S. Meat Export Federation, the U.S. Beef Checkoff ® and brand partners Schmacon™ and Megas Yeeros®, helped fund the tour or provided product. Also assisting were 10 well-known chefs in the region. One, Chef Nojoud Saadeddin, invited Biggs to appear as a special guest on her cooking show on Amman TV in Jordan. 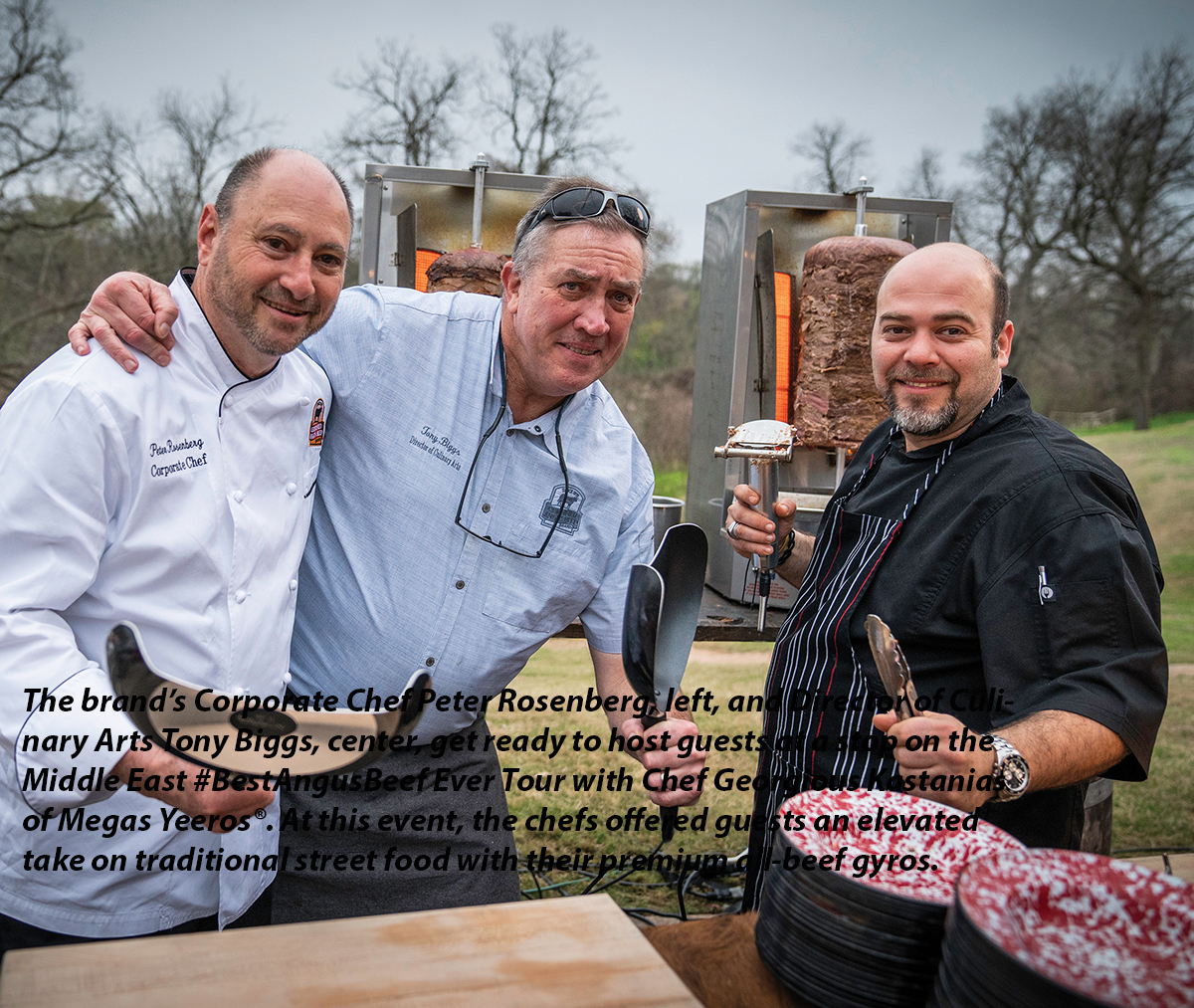 So popular was the tour, a second version was held in conjunction with Taste of the Caribbean, a noted culinary event in the region. Future tours are planned for new corners of the globe, all with an eye on guests and events relevant to the specific markets that celebrate the brand’s worldwide network of partners and hungry consumers. 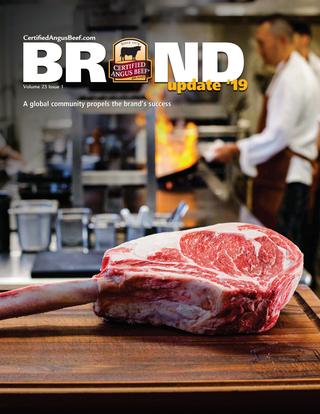 This story was originally published in the 2019 Brand Update. 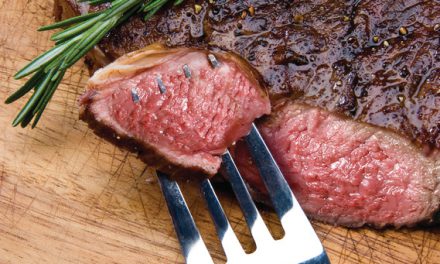 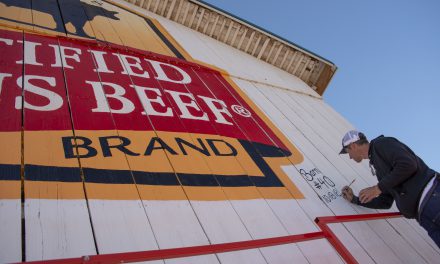 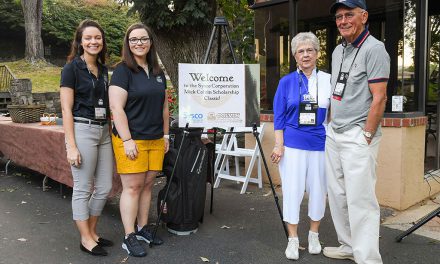 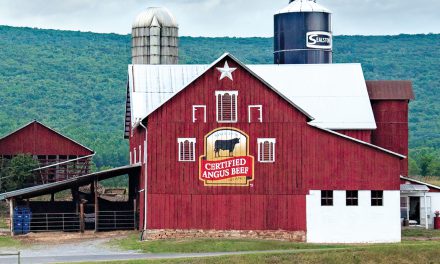